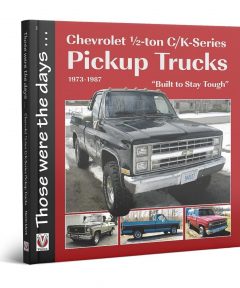 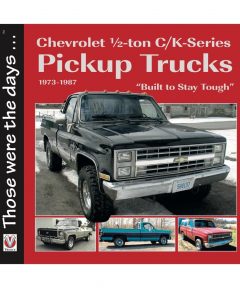 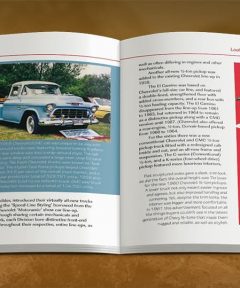 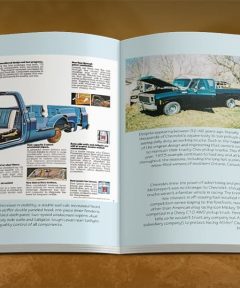 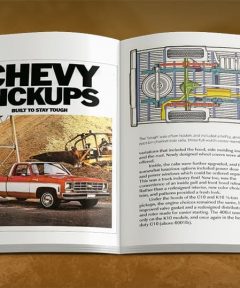 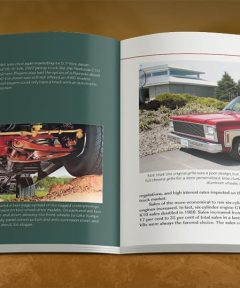 Discover trucks ‘Built to Stay Tough’ in this detailed look at the history and development of the popular Chevrolet 1/2-ton C/K Series pickup trucks made from ’73 to ’87. Complete with specifications, model options, and revealing the market forces that influenced the pickup’s evolution, it includes rare cutaways, previously unpublished photos, and examples of restored and customised vehicles.

Introduced for the 1960 model year, the Chevrolet C/K Series continued in production until 1999. This book focusses on the 3rd generation models, produced between 1973 and 1987, an all-new design for the series, subtly styled, with a clean, handsome design, and smooth flowing lines. In a highly competitive marketplace, the C/K held its own against the likes of the Ford F150, as well as Dodge, Jeep, and International Harvester – companies that constantly worked to capture a greater market share.

This latest book in Veloce’s Those were the days…™ series begins with a brief history of Chevrolet’s ½-ton C/K-Series pickups and includes a detailed look at the evolution of the 3rd generation models, with year-by-year descriptions. It also covers the market demands which often led to the introduction of niche models, intended to broaden the market base.

The 3rd generation C/K series was born into a tumultuous period that saw a fuel crisis, ever changing fuel economy standards, and increasingly stringent pollution regulations. The period also saw a greater interest in 4WD models, and a quest by manufacturers reduce overall weight. Chevrolet reacted throughout these changing times, and the stylish 3rd gen C/K model continued with a wide array of options to help broaden its appeal, while the stylish and tasteful design meant it remained a popular pickup for many lifestyles, looking as appropriate outside of a New York movie theatre, as it was foraging in the woods.

As well as detailing production models, with specifications and options, you’ll find industry facts and figures, rarely seen cutaway images, and previously unpublished photos of fully restored C/K trucks, and customisations by Chevy enthusiasts, making this a wonderful record of a much loved classic American pickup.

Chevrolet ½-ton C/K-Series Pickup Trucks 1973-1987 – “Built to Stay Tough” covers the 3rd generation Chevrolet 1/2-ton C/K-Series pickups produced between 1973 and 1987 only (including some restored and customised vehicles originally manufactured during that period).