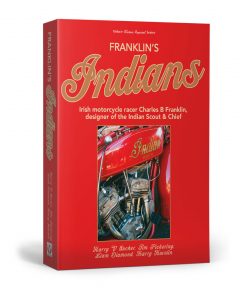 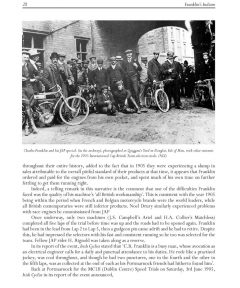 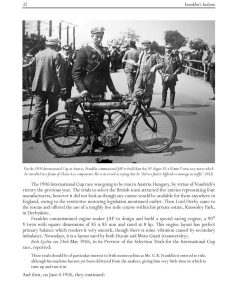 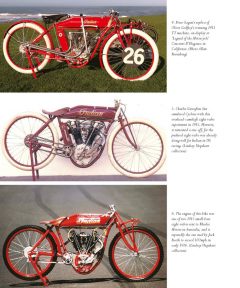 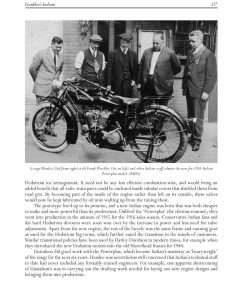 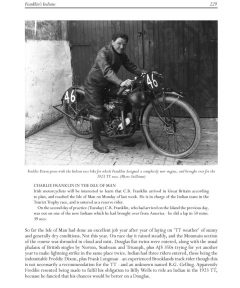 The story of Charles B Franklin, a successful Irish motorcycle racer, who became design engineer at the Indian motorcycle factory in Springfield, MA, USA. He designed the Indian Scout and Chief, two iconic models that helped give American heavyweight V-twin motorcycles an enduring popularity.

Franklin’s Indians – Irish motorcycle racer Charles B Franklin, designer of the Indian Chief is ranked one of the 75 Best Motorcycle Racing Books of All Time by BookAuthority.

The Indian has been the iconic image for American big V-Twins down the years, due in no small measure to the motorcycles designed by Charles B Franklin – the Indian Scout and the Indian Chief.

Charles Franklin was born and raised in Ireland where he quickly became involved in motorcycle racing during the pioneer years. He rapidly established himself as Ireland’s first big star of racing and was the first to represent Ireland in international motorcycle competition. In the Isle of Man TT he consistently finished in the top eight, and in 1911 claimed second place, a remarkable achievement in itself.

But it was when he moved to Indian in the USA, where he became the Chief Design Engineer, that his genius really flowed. His designs catapulted Indian back into the forefront of motorcycle design in the 1920s and ’30s and his racing engines and motorcycles won much glory for Indian against stiff opposition. Franklin introduced remarkable improvements in sidevalve combustion chamber design that pre-dated the work of Ricardo.

He championed an holistic approach that popularised new features such as the semi unit-construction ‘powerplant’, helical-gear primary drive, double-loop full-cradle frames and a host of other improvements to the early motorcycles. This book not only chronicles his life but also sheds much new light on the history of Indian motorcycles and the often turbulent times of the Indian Motorcycle Company itself.

A much needed book for all Indian fans and all who love the history of the classic American V-Twins.

“ … this lavishly illustrated book, whilst concentrating on Franklin, reveals a lot more of the company’s history than other works…thanks to some real detective work and the publication of this important work Franklin’s true impact on motorcycling in general can be seen by all…a must read for all Indian fans…a quality work well presented…” Ian Kerr (Inter-Bike)